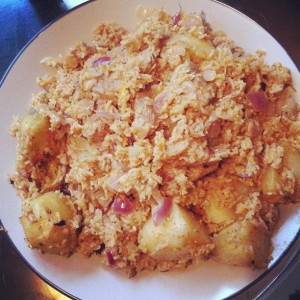 Biriyani was a dish originated in Iran and travelled to the Indian subcontinent with the Iranian travellers. In India we have several variants of biriyanis. I grew up in Kolkata (Original Capital of India by the British) and the Calcutta Biriyani in the list of famous Biriyanis and is definitely my favourite one, this style biryani evolved from the Lucknow style when Wajid Ali Shah, the last nawab of Awadh was exiled in 1856 in Kolkata. But he did not forget bringing his personal Chef with him as he was very particular about his food. Due to recession aloo (potato) had been used instead of meat. Later on that has become the specificity of Calcutta Biryani, though meat is also served along with it. In addition, this biryani is much lighter on spices than compared to other Biryani’s.

I thought a little history about this finger licking dish would be a good piece of trivia to brag to your friends about when you next time visit an Indian restaurant.

So let’s take a look at the ingredients we need for this:

4 Big Potatoes, half boiled and diced into big chunks

Couple of cinnamon sticks and cardamom

This is a long process I agree but trust me the effort is so worth it because I can promise this is definitely going to be one of the best meals you’ve ever had! 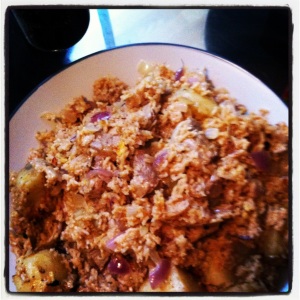