They say good things happen to you when you least expect it – that is exactly what happened when I randomly got invited for a meal to Dorchester by Zomato one fine wednesday afternoon for a meal in the evening. It is really exciting for a foodie to get invited to one of the fanciest restaurants in London but then you also gotta think about what you gotta wear when you are going for a meal to a swanky hub like this. But well, I was working so had no choice but to land up in my work attire (snore bore) and to be fair I was a little worried that I might get some strange looks off people carrying LV bags and wearing Prada dresses, but guess what? I didn’t. The good thing about classy places is that you don’t need to make that much of a superficial effort as long as you are well behaved (which I think I am… ok most of the times). 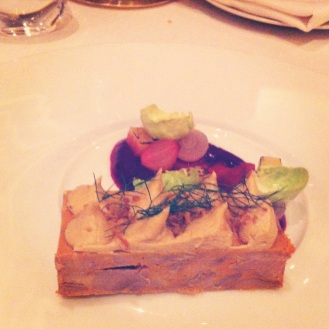 Now let’s get to the most exciting bit – The FOOD (Yay). It was definitely one of the BEST meals I have had and when I say that I mean some serious business. The bread served at the table was beautiful, fresh and so tasty and I could binge on them all day. I absolutely fell in love with the lobster burger starter, they were the perfect size which goes inside your mouth in one go and was succulent soft and totally melts in your mouth (nom nom). We were served three different kind of wine with each course (yeah yeah I know its a given but hey still worth mentioning right?) and let me tell you m’dear that was definitely some high quality wine specially the dessert wine (usually not the biggest fan of this, but ohh boy this one blew my mind). I asked the waiter not to serve me dessert wine because of my obvious dislike towards it and then he took that as a challenge to serve me a different kind of dessert wine, which he promised I would love – he couldn’t have been more right. The wine was a smokey chocolately cinnamony wine – ’nuff said! My starter was a duck pate (they had some complicated name for it which I can’t recall now) followed by the perfectly cooked haddock and a beautiful sauce – definitely impressive to say the least. But the one dish that had me at hello was the gooey, creamy chocolate and marzipan dessert (must try).

The ambience was obviously very classy and royal – come on we are talking about The Dorchester here! But what I really appreciated was the customer service and the absolute politeness of the staff (a lot of times places like these have a different kind of snobbery about them which is rather off putting). The minute I entered one of the guys took my coat and then he again came and gave it back to me while I was leaving (without me even having to ask).

Verdict : Next time you gotta big celebration coming up or you need to impress someone you know where to go!